Are You Being Gaslighted 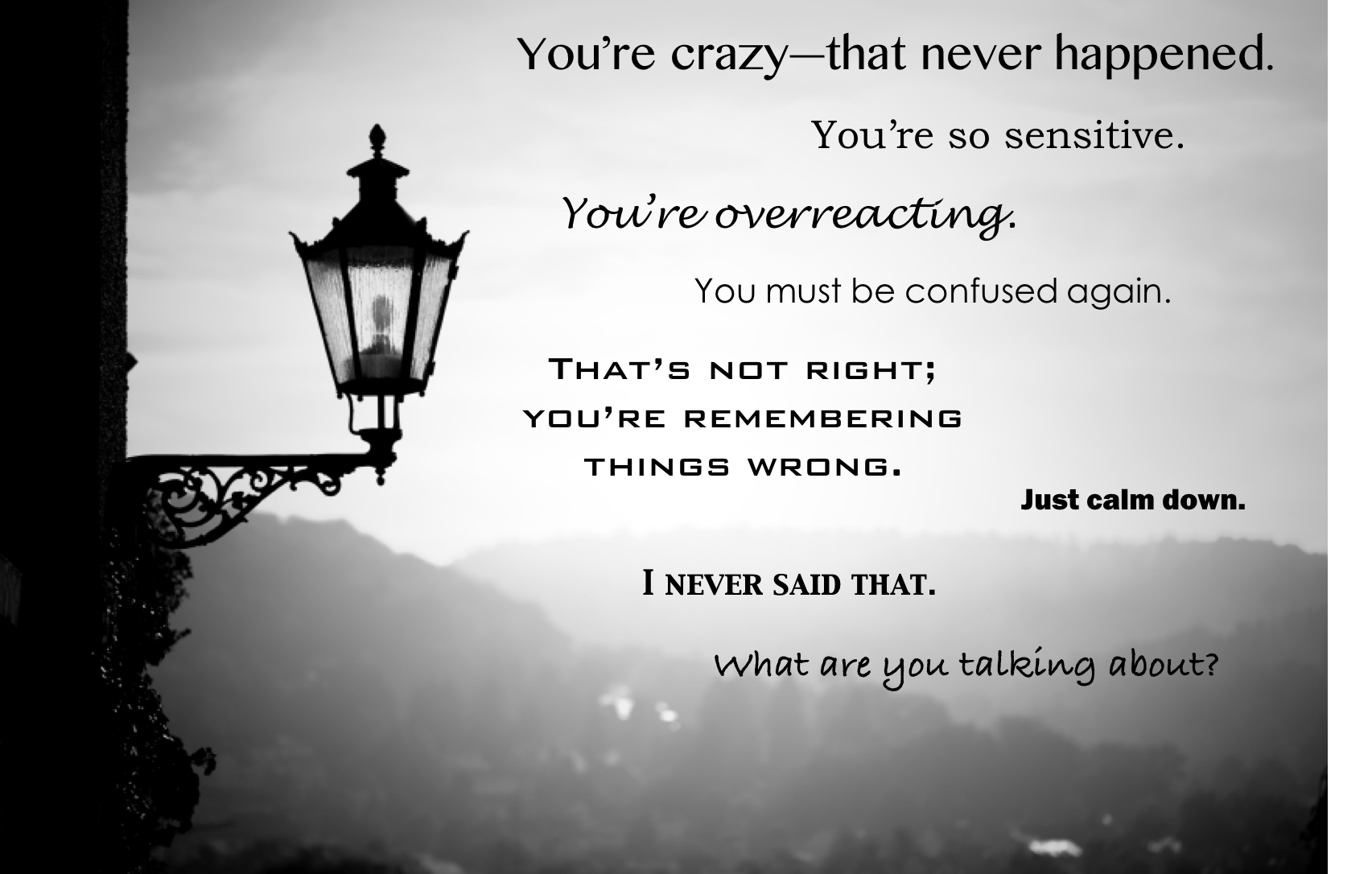 Are You Being Gaslighted

Are You Being Gaslighted?

Are you in a gaslighting relationship? Here is how to tell.
Posted May 19, 2009

A reader asked me, if it is possible over time to get so beaten down and so sure you might be at fault, that you can’t identify the dynamic? The answer is YES. The Gaslight Effect happens over time, gradually, and often, by the time you are deep into the Gaslight Tango (the dance you do with your gaslighting partner, where you allow him to define your reality) you are not the same strong self you used to be. In fact, your ego functioning has been compromised and, no longer being certain of your reality, you are not often able to accurately identify when something is “off” with your partner.

The process of gaslighting happens in stages, although the stages are not always linear and do overlap at times, they reflect very different emotional and psychological states of mind.

The first stage is disbelief: when the first sign of gaslighting occurs. You think of the gaslighting interaction as a strange behavior or an anomalous moment. During this first stage, things happen between you and your partner, or your boss, friend, family member, that seem odd to you.

A young woman I know let’s call her Rhonda, just told me about her second date with Dean. She was shocked when, after a terrific dinner, he left her at the bus stop. He told her she was nuts to wait for a bus, and, if she wanted to travel that way, he was not going to wait with her and would just see her another time. But, the piece de resistance, was that he called her later that night (note that she picked up the call) and, he was insistent that there was nothing wrong with his jumping on the subway, while she took the bus. Further, he told her that he was certain there was something wrong with the way she made choices about traveling. She argued, but, ultimately wrote off his behavior as “really weird”. In recounting the story, she says it is “weird”, and, that he must have a “thing” about buses but, she does really want to see him again they have so much in common and he is really romantic.

Unlikely that this is going to be an isolated incident. Dean sounds like he has to get his own way?and, he has to be right. Rhonda is very attracted to him and wants things to work out, so, she is likely to explain away his behavior, at least for awhile.

The next stage is defense: where you are defending yourself against the gaslighter’s manipulation. Think about it?you tell your boss, for example, you are unhappy with the assignments you have been getting; you feel you are being wrongly passed over for the best assignments. You ask him why this is happening. Instead of addressing the issue, he tells you that you are way too sensitive and way too stressed….. well, maybe you are sensitive and stressed, but, that doesn’t answer the question of why you are being passed over for these better assignments. But, rather than leave it at that, or redirect the conversation, you start defending yourself, telling your boss you are not that sensitive or stressed, or, that the?stress?doesn’t interfere with your ability to work. But, during this stage, you are driven crazy by the conversation…. going over and over, like an endless tape, in your mind.

What’s worse, is that these kind of conversations characterize your relationship more and more. You can’t stand that your boss sees the situation like that and you work even harder on the assignments you find boring, even demeaning, just to prove that you are not overly sensitive and stressed out.

The next stage is?depression: By the time you get to this stage you are experiencing a noticeable lack of joy and, you hardly recognize yourself anymore. Some of your behavior feels truly alien. You feel more cut off from friends in fact, you don’t talk to people about your relationship very much none of them like your guy. People may express concern about how you are and you are feeling they treat you like you really do have a problem.

One of the examples I wrote about in my book?The Gaslight Effect: How to Spot and Survive the Hidden Manipulations Other People Use to Control Your Life, concerns a lovely woman, Melanie. In the story told, Melanie was frantic because she couldn’t find the “right” kind of salmon (her husband likes wild salmon and the grocery only had farm raised) to serve at the dinner party for her husband’s company. She knew her husband would accuse her of not caring enough about him to go to the store earlier in the day. Incidents like this were happening so much at home, Melanie began to believe he was right. After all, what was more important than her husband? Why wasn’t she a more considerate wife?

She was unhappy almost all the time and, she really believed that she could be a better, more considerate wife. She began to look for evidence of her poor behavior. Melanie had lost the ability, over time, to see anything else wrong with the relationship, besides that she was a less than adequate wife.
It took a long time, and a lot of reflection and analysis, reality testing and self-management, for Melanie’s view to shift and for her to reclaim her reality and her life.

How do you know if you are being gaslighted? If any of the following warning signs ring true, you may be dancing the Gaslight Tango. Take care of yourself by taking another look at your relationship, talking to a trusted friend; and, begin to think about changing the dynamic of your relationship .