An excerpt from my book, Marriage Rebranded: Modern Misconceptions & the Unnatural Art of Loving Another Person. (Read time: 5 mins) 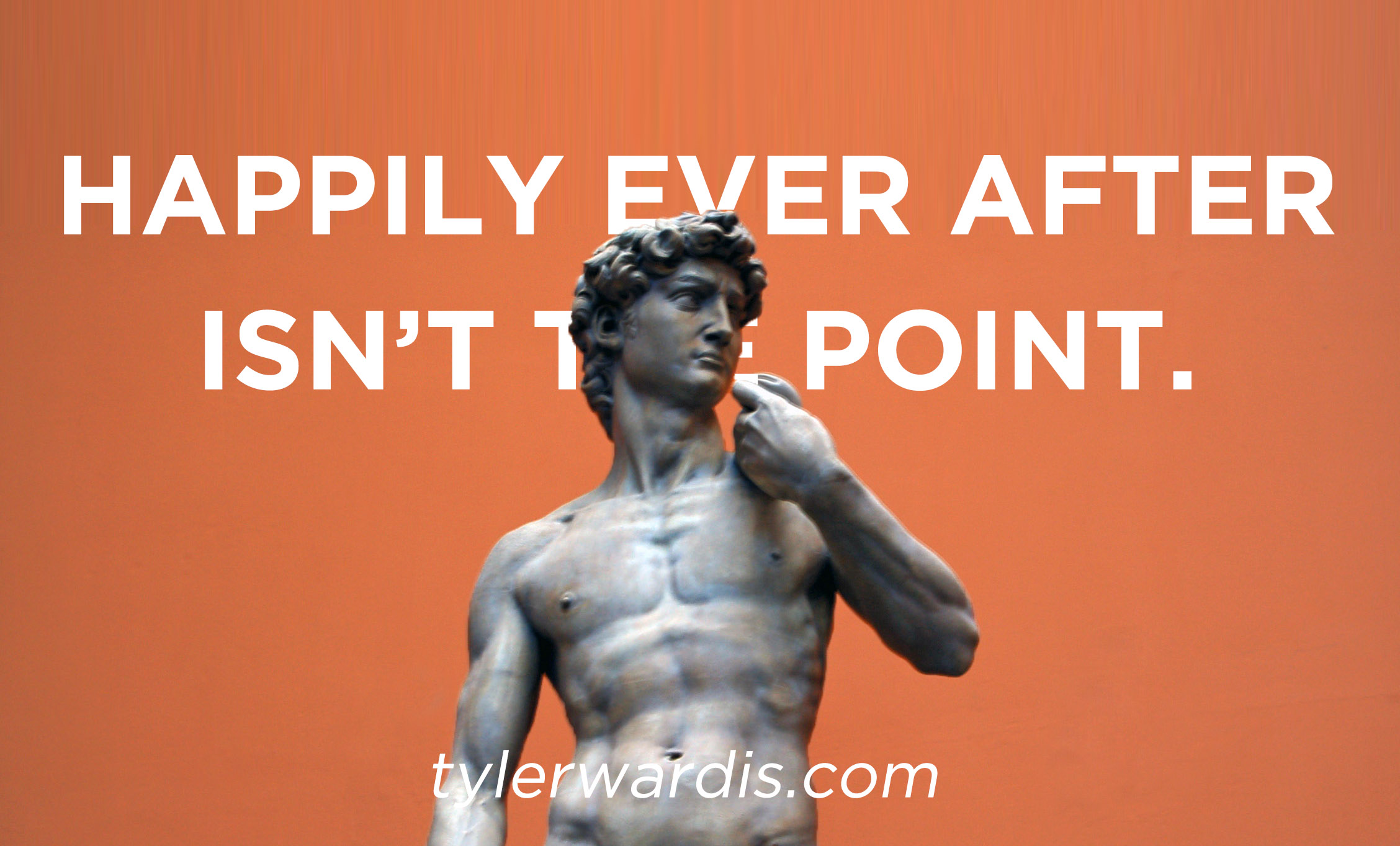 As legend tells it, the story of Michelangelo and his sculpture of David has something to say to us about marriage.

As Michelangelo walked the art market, he passed a stone that had sat for some time, unwanted by anyone. Apparently several artists had tried to use the stone previously but found it had too many veins to produce anything of value. As Michelangelo walked by this rejected rock, he claims the stone spoke to him saying that David was inside of it. As he inquired about its price, the shop owner gave him the stone for free—simply wanting to free up space for a more sellable piece.

Michelangelo used the friction between his chisel and the rock to chip away—piece by piece—at this “useless” stone. Michelangelo didn’t sculpt like other sculptors. No, he didn’t believe he was creating something from nothing. Instead, he believed his slow, deliberate chiseling actually liberated what was already inside of the stone. He saw beautiful figures beneath the surface and considered it his responsibility as an artist to simply set them free.

“Carving is easy. You just have to go down to the skin and stop.”

Two years of chiseling later, Michelangelo had set David free—and in the process, he sculpted this unlovely piece of rock into one of history’s most renowned pieces of art.

I think there’s more truth about marriage in this story than in most of our modern ideas about relationships. Marriage isn’t, in fact, our gateway to happily ever after. It’s more like a chisel in Divine hands. And though there’s plenty of friction involved, it’s designed to chip away at all the dysfunction in our lives and free the beautiful statues inside.

Interestingly, the Bible seems to agree with this picture that Michelangelo’s carving philosophy offers us. In fact, if you’re ever wondering who you can blame for this chiseling sensation in your marriage, Adam—the first human in the Bible—is your guy.

It all started when the first human on earth decided to name his wife after a hazardous chemical reaction.

After having just been introduced to the only other human being on earth, he says, “She shall be called ishshah—woman, because she was taken out of ish—man.”

Ish and ishshah. I assume that though they have a certain ring to them, these won’t be topping your list of names for future kids. Even so, they paint a picture about marriage that answers many of our modern questions.

To start, both words are derived from the root word and Hebrew character esh, which means fire.

This means that the original word picture we have for the relationship between a man and a woman is an all-consuming, tireless-in-nature, potentially hazard-creating fire. And though this picture lends itself to the modern concept of heated romance or passionate love, the Bible consistently points to a different purpose of fire.

Fire happens to be one of the Bible’s primary metaphors for purification and personal development.

Jesus promised us, for example, that “everyone will be salted with fire.”

God points to the purpose of fire when He says, “I will put [them] into the fire, and refine them as one refines silver.”

King David, too, alludes to the intention of fire when he reflects in the Psalms, “We went through fire and through water, yet you brought us out into a place of abundance.”

It would seem that the relationship between two spouses—fire—as depicted by biblical accounts, is a source of personal refinement, designed to play a significant role in one’s process of growth and maturity. But hang with me—the biblical picture gets better.

In the New Testament, Paul the apostle goes on to compare love in marriage to the love Jesus showed humanity. He says (emphasis mine):

Husbands, love your wives, just as Christ also loved the church and gave Himself up for her, so that He might sanctify her [literally, purify her internally by the reformation of her soul], having cleansed her by the washing of water with the word, . . . having no spot or wrinkle or any such thing; but that she would be holy and blameless.

This idea was beautifully expressed in a recent Orthodox Christian wedding we attended. During the ceremony, they acknowledged that Jesus did everything He did—including death on a tree—for our salvation. Then the priest looked at the couple and, borrowing Paul’s comparison of marriage to Jesus’ love, said,

You’ve been given to one another for the other’s salvation.” Not salvation in the sense that only-Jesus-can-save, the priest clarified, but the kind of salvation that’s alluded to by the original Greek word Soteria— meaning one’s holistic healing, deliverance, and prosperity.

What a beautiful picture of marriage.

Marriage is actually about you and your spouse’s holistic healing, deliverance, prospering, and growth. And similar to our former picture from Michelangelo, the Bible alludes to this unnatural relationship as a sort of tool in Divine hands to help us become increasingly beautiful—increasingly our best and brightest selves.

So what about this modern idea of happily ever after? Does it have a place or do we abandon the idea altogether to embrace the refining fire of marriage?

Not at all. Happiness is a very real result of a healthy marriage. Even modern social research shows that marriage historically offers more happiness than singleness or divorce.

However, as we’ve seen from Michelangelo, Adam, and Paul, happiness is not the primary goal of your marriage. Becoming more beautiful by becoming your best self—more loving, joyful, peaceful, patient, kind, faithful, gentle, self-controlled—is the goal.

Marriage—like fire—can be an all-consuming and potentially painful substance. But also like a fire, it can refine us. And like a chisel liberating the figures inside of a rock, as it would seem, marriage is a tool that the Divine uses to make us beautiful.

“Marriage is where depravity is best exposed . . . and because it, more than any other relationship, bears more potential to draw our hearts to heaven, it can more readily give us a taste of hell.”

I know that marriage can be one of the more challenging things we experience in life. And I know that at times, it demands far more than we feel we can give. I know there are moments when walking away seems like the only sane and rational thing to do. Yet I also know that marriage multiplies what we can become—both as individuals and as couples.

Marriage, even though it will introduce us to some of life’s most arduous moments, has brilliant intentions in mind. It’s unapologetically interested in chipping away at our dysfunctional thoughts, patterns, and postures in life and inviting us—and our spouses—to become the best version of ourselves.

When we remember this brilliant intention to liberate us—the beautiful statues trapped within our own mess—we begin to see a hopeful view of the relationship, even in its darkest times.

It exchanges our goal of happiness for the far more valuable goal of wholeness. It turns our focus from personal fulfillment to mutual personal development.

*This is an excerpt of Marriage Rebranded: Modern Misconceptions & the Unnatural Art of Loving Another Person. Buy your copy of the book here.