Traits of the Passive / Aggresive Man 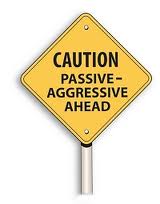 Traits of the Passive-aggressive man

FEAR OF DEPENDENCY – Unsure of his autonomy & afraid of being alone, he fights his dependency needs – usually by trying to control you.

FEAR OF INTIMACY – Guarded & often mistrusful, he is reluctant to show his emotional fragility. He’s often out of touch with his feelings, reflexively denying feelings he thinks will “trap” or reveal him, like love. He picks fights to create distance.

FEAR OF COMPETITION – Feeling inadequate, he is unable to compete with other men in work and love. He may operate either as a self-sabotaging wimp with a pattern of failure, or he’ll be the tyrant, setting himself up as unassailable and perfect, needing to eliminate any threat to his power.

OBSTRUCTIONISM – Just tell a p/a man what you want, no matter how small, and he may promise to get it for you. But he won’t say when, and he”ll do it deliberately slowly just to frustrate you. Maybe he won’t comply at all. He blocks any real progress he sees to your getting your way.

FEELING VICTIMIZED – The p/a man protests that others unfairly accuse him rather than owning up to his own misdeeds. To remain above reporach, he sets himself up as the apparently hapless, innocent victim of your excessive demands and tirades.

MAKING EXCUSES & LYING – The p/a man reaches as far as he can to fabricate excuses for not fulfilling promises. As a way of withholding information, affirmation or love – to have power over you – the p/a man may choose to make up a story rather than give you a straight answer.

PROCRASTINATION – The p/a man has an odd sense of time – he believes that deadlines don’t exist for him.

CHRONIC LATENESS & FORGETFULNESS – One of the most infuriating & inconsiderate of all p/a traits is his inability to arrive on time. By keeping you waiting, he sets the ground rules of the relationship. And his selective forgetting – used only when he wants to avoid an obligation.

AMBIGUITY – He is master of mixed messages and sitting on fences. When he tells you something, you may still walk away wondering if he actually said yes or no.

SULKING – Feeling put upon when he is unable to live up to his promises or obligations, the p/a man retreats from pressures around him and sulks, pouts and withdraws.